One hundred years after the première of the ballet “L’Après-midi d’un Faune”, choreographed and interpreted by Vaslav Nijinskij for the Ballets Russes, La Scala’s Museo Teatrale is celebrating that extraordinary, revolutionary artistic experience.

Opened until the next 9 December, “The myth in the Myth” is curated by the dancer and choreographer Toni Candeloro along with the costume historian Federica Tornese. Conceived as an investigation upon the historical and cultural context of the early-twentieth-century Paris, the exhibit shows a set of drawings and sketches by Leon Bakst, Valentin Gross Hugo, Jean Cocteau and Bernard Daidée, all coming from Candeloro’s private collection.

“L’Après-midi d’un Faune” was the product of the unique encounter of men such as Sergej Diaghilev, Leon Bakst and Nijinskij. It was first represented on 29 May 1912 at the Théâtre du Châtelet, overturning the basis and the concept of the whole art of ballet for years to come. 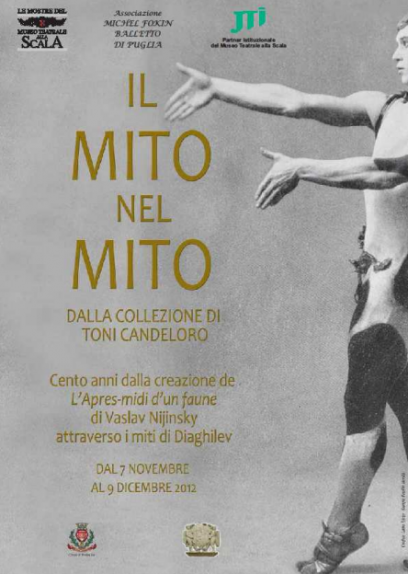 Inspired by Greek and Egyptian bas-reliefs, Nijinskij created a bi-dimensional choreography, forcing dancers to act and move along a fixed line. Following a similar philological approach, “Il Mito nel Mito” retraces the birth of the mythological ballet, from Isadora Duncan to Michel Fokine and Bakst.

The exhibition, organized by the Associazione Michel Fokine along with the municipality of Brindisi, is enriched by Candeloro’s documentary “La voce del Fauno”, with the participation of Milorad Miskovitch.