the today’s “Prima delle prime” talk is the last before the summer break, but the Amici della Scala are already looking ahead to the next Scala’s season, which will open on December 7 with Richard Wagner’s Lohengrin, conducted by Daniel Barenboim. It’s going to be a year of  exceptional shows, mainly dedicated to Wagner and Giuseppe Verdi, two musical geniuses who were both born in 1813 but never met each other, separated by a legendary rivalry. La Scala is going to celebrate them in a common anniversary.

Seven Verdian operas will be displayed in the 2012/2013 season, as well as seven works by Wagner. Two light intermezzo will then consist of the first performance of  Alexander Raskatov’s A Dog’s heart (Sobacˇ’e Serdce), conducted by Valery Gergiev (the libretto, written in Russian by Cesare Mazzonis, is based on a Michail Bulgakov’s short satirical novel), and of the sparkling  La scala di seta by the young Rossini. From this blog’s columns, the Amici della Scala will bring you up to date with all the operas and ballets, either through the “Prima della prime” series of public talks or through exclusive interviews with musicologists and drama critics, comments and in-depth insights.

Major event of the year will be surely the four-night performance of the entire Ring, with conductor Daniel Barenboim. The last time it happened at La Scala was in 1938. But the whole season is marked with the excellence of the conductors and the outstanding calibre of the directors. Falstaff will be conducted by Daniel Harding, with staging by Robert Carsen. Fabio Luisi will conduct Don Carlo, while the young Daniele Rustioni has been confermed on the music stand.

There’s one more thing we pleasently look at: the 2012/2013 bill is displaying ten debuts. For the first time, Daniele Abbado will be director of Nabucco. Valery Gergiev and Giorgio Barberio Corsetti will be respectively conductor and director of Macbeth. Finally, the 35-year-old Damiano Micheletto will stage Ballo in Maschera. The next season at La Scala demonstrates how theatre can encourage young talent. This is a commitment which lies at the heart of theatrical mission: looking ahead and reflecting the present. La Scala’s Artistic Director Stéphane Lissner, deservedly reappointed to his role until 2017, knows it very well.

It’s going to be an extraordinary season. The Amici della Scala will keep following all the appointments and the protagonists of it. 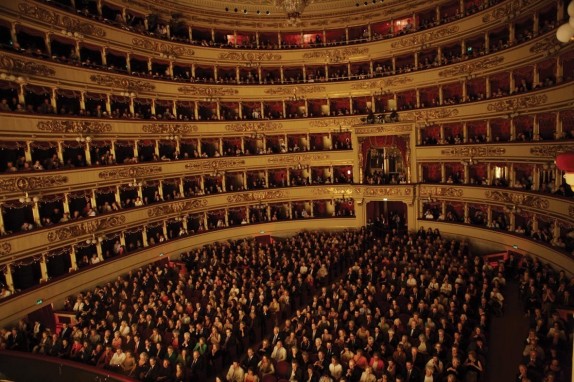