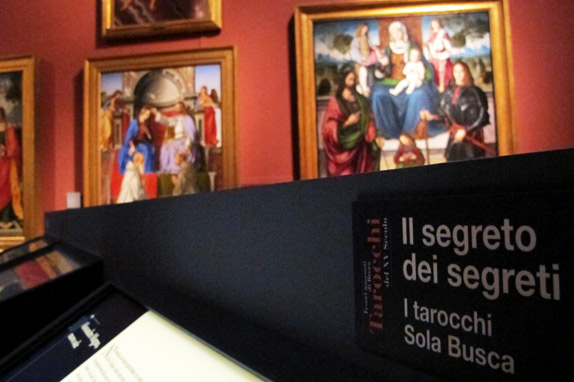 This is our hommage to the exhibition hosted by the Pinacoteca di Brera, Milan, titled “Il segreto dei segreti – I Tarocchi Sola Busca”. The exhibition, ended on last February, was dedicated to the oldest complete Italian tarot deck (which is also the oldest in the world), known as the Sola Busca deck after the names of its previous owners. The deck was bought by the Ministry of Heritage and Culture in 2009.

The Sola Busca deck is presented as exceptional from many points of view. First, it is the oldest complete deck consisting of 78 cards, 22 “triumphs” and 56 cards of the four traditional Italian suits (coins, swords, batons and cups). They are burin engravings printed on paper, mounted on cardboard, which were then illuminated in colors and gold.

We would like to thank the Pinacoteca di Brera and the “Soprintendenza”, in particular our dear friend Sandrina Bandera.