Radiocorriere TV, the official weekly magazine of Rai television, accessible through the broadcasting group’s Press Office website, has recently published a short text by Anna Crespi, the president of the Amici della Scala association, in which she tells her feelings emerged during the rehearsal of the renowned Verdian aria “Và pensiero”. 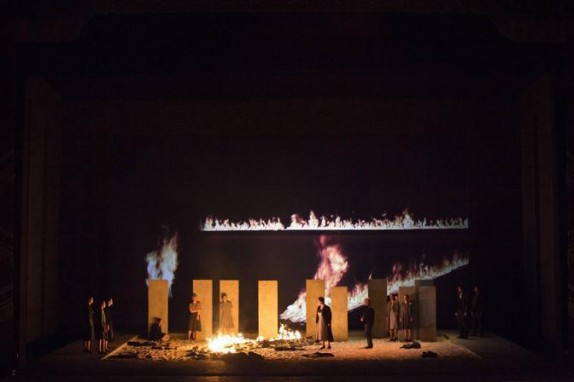 The theatre is dark and empty. On the stage, some workers are concluding their tasks. They’re dressed in black: jeans and t-shirts, all in one colour. Here we are: one last touch, and the stage is fit for the rehearsal. Workers leave. In the orchestra’s mystical gulf, the scores lie on the music stands: all the folders are identical, all bound in red. I am alone, closed in the darkness of the box, recording my feelings. The wait is for Nabucco’s chorus. Though two big lights are illuminating the stage, the whole room is immersed in a deep darkness. Finally I hear something. The artists come, in informal clothes. I can tell their voices. The director’s assistant is a tiny, energetic woman: she holds a paper in her hand, she instructs the right playing positions. The chatter ends. The silence is slightly touched by the whispers of the lighting technicians.

As I wait, the one-time stagings come to my mind, and sceneries, big and wonderful painted backcloths, and the extraordinary Benois, Alexandre and Nicola, father and son. The Amici della Scala once dedicated an exhibition to them. It was in a double venue: Scala and Brera. I can remember the bizarre passages between the two venues, via Verdi was congested by visitors. I’m thinking to the 7th Dicember of 1966, when Nabucco had sets and costumes by the very Nicola Benois, while Gianandrea Gavazzeni conducted.

Now here’s the maestro, collaborating to the orchestra’s directions. I can’t see the musicians, but I start to hear the music. The lighting maestros at the centre of the stage never raise their eyes over the scores, sometimes making comments in a low voice. From the small ladder on the left of the stage, the lighting director comes quickly. Rehearsal has started. All artists approaches. They take positions according to their part. Three children are in the front row: they’re embraced with painful affection by three woman of the chorus. Then Bruno Casoni, the chorus master, walks in. With hands behind the back, he listens without conducting. The magnificent chant of the Nabucco’s chorus reaches me: Va’ pensiero sull’ali dorate… As I listen, I go beyond the theatre, I am music now, beyond time and space. At the end, a solitary applause get up: it is the acoustic approval by a technician sitting in the parterre.

The platform empties in silence. The theatre lights are on. Two cleaning men come in. They act with competence. I am surprised by thinking that even their work is in harmony with the event I attended. A long time ago, music and singers were the protagonists. But then the direction gained an increasing importance, until it became the co-star, as it is today. I’m thinking about Visconti, who was the first to put a mirror on stage. I’m thinking about the major scenographers as well as about the history passages through which the abstraction between music and direction became a perfect blend. A foretaste of what it would have become: a great show in the lyric performance, a perfect accord between platform, lights, music and environment. “All combines in an unique enchantment”, I thought, as I left my box.